What’s Up | The Story Behind Fresh Apparel

Hey y’all! I’m not ready to launch just quite yet, but I thought it would be fun to keep y’all in the loop of things to come. You may have noticed my hints of business meetings and whispers of being consumed with a project– well, that project is “Fresh Apparel Denim Company”! (!!!) 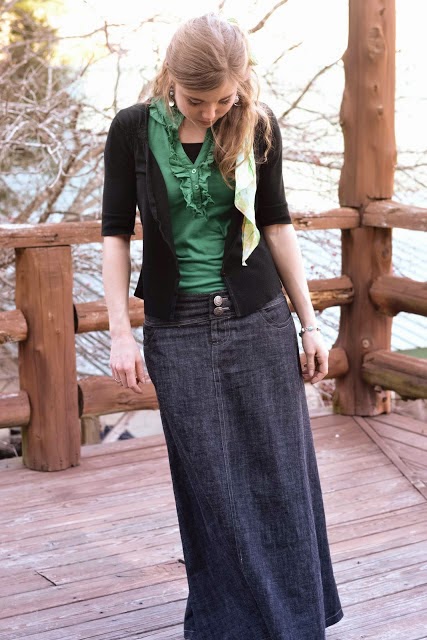 Here’s the story, from the beginning.
February 2012: I created the “Dark Denim Wide Waistband Skirt” because I was wanting a classy denim skirt. I of course blogged about it here on Fresh Modesty and on my almost-forgotten sewing blog, Eager Hands. It became instantly popular on Pinterest and I received a ton of positive response. More than praise, however, I got a request: “MAKE ME ONE!!” or, “Tell me how to sew one!”
December 2012: I released, “How To Sew Denim: A Step-by-step Guide to Creating Wide Waistband Denim Skirts“, a 72-page eBook that teaches you how to sew a custom skirt for yourself. I wanted others to be able to enjoy this skirt, but I didn’t have the time to be sewing them for other people. I renamed the “Dark Denim Wide Waistband Skirt” the “Errand #17” for space’s sake. 😉
2013: I continued creating denim skirts for myself and sharing them with my readers, who began to exponentially grow after a few plugs by popular internet content creators on Facebook. Requests to sew for others who did not have the skills continued to stream into my inbox and I would be sad I couldn’t help provide them with modest clothing as I turned each one down, knowing I’d have to charge over $180/ skirt because of the time it takes me to make one.
October 2013: I read Empowered Traditionalist’s blog posts about starting a clothing line and realized, “Hey, it doesn’t take $100,000 to launch a clothing business!” Also around that time my friend Jordan Taylor had a very successful Kickstarter campaign to raise funds for his new album and my wheels began turning.
February 2014: After going through a rough season of health, more than ever I realized, “I have one life. What’s holding me back from pursuing my dreams?” So, we had a family meeting about it and all agreed this was something I should go for. I began googling my fingers off, reading “Fashion for Profit” books, and looking for a manufacturer. My first couple weeks of research proved pretty useless– I started to get discouraged and almost gave up, until one night I just googled something one. more. time. and all of a sudden link after link appeared and I stayed up until 3 am emailing companies and writing down information and praying it would turn into something. Over the next few weeks I heard back from manufacturers, got denim pricing information, and ordered myself a day planner to keep it all organized.
March 2014: I met with two manufacturers and got labor estimates from them. I received denim samples in the mail and registered a domain name. I researched buttons and labels and hired a logo designer. I’ve spent hours doing calculations over and over, seeing where I could shave costs here or possibly do better there. I’ve been bleeding coffee as I try to manage all this on top of still helping around the house and blogging and launching Bell Tower Boutique and going to Florida for a weekend.
Now: I took a day trip to Bristol, TN (6 hours from my house) to meet with a manufacturer there on Monday and decided that’s the company I’ll go with. Currently, I’m waiting for my pattern to finish being perfected by a pattern maker, then I’ll send that to the manufacturer so they can make a sample and make sure I love how it turns out.

What to expect: In the next 2-3 weeks I will be launching a Kickstarter campaign to raise the initial capital needed to run the first line of production for the Errand #17 skirt. If you’re not familiar with Kickstarter, here’s how their website explains how it works: “Project creators set a funding goal and deadline. If people like a project, they can pledge money to make it happen. Funding on Kickstarter is all-or-nothing — projects must reach their funding goals to receive any money. “
I’m not just asking for hand-outs, though. Kickstarter is awesome in that I can offer “rewards” if y’all pledge certain amounts. Essentially, I’ll be “selling” the skirts before they are put into production. This way, I won’t have to go into debt to start Fresh Apparel. I’ll also be rewarding t-shirts for backers who want to help get me going, but may not be able to afford a skirt. I won’t claim they’re going to be cheap (at least by my standards. Made in the USA, wot!), but they will be worth it. And if I don’t make my goal, y’all aren’t out any money and I don’t start the business, simple as that. 🙂
If everything pans out as planned, I will also be making other skirt styles available from Fresh Apparel. I thought it wise to start small, though. And because of that, there will be a limited number of skirts available as rewards on Kickstarter, so once it launches, don’t hesitate.
My success depends on you– my friends and readers. Let’s keep this a secret for now, but once I launch the Kickstarter, I’m going to need y’all to get on your best sharing shoes and tell every skirt-wearing person you know about it! It’s been an awesome project for me so far and I’m ridiculously excited to be able to offer this to y’all.
Thanks for letting me share! I hope that satisfies your curiosity! Please feel free to ask any questions and I will try to answer them! Love y’all so much.

68 thoughts on “What’s Up | The Story Behind Fresh Apparel”