Wages of Sin // in Bold Colors

Hey y’all! This week I was working to take care of some things that have been hanging over my head and consuming my time, so hopefully now I’ll have opportunity to catch up on all these blog post drafts! 🙂 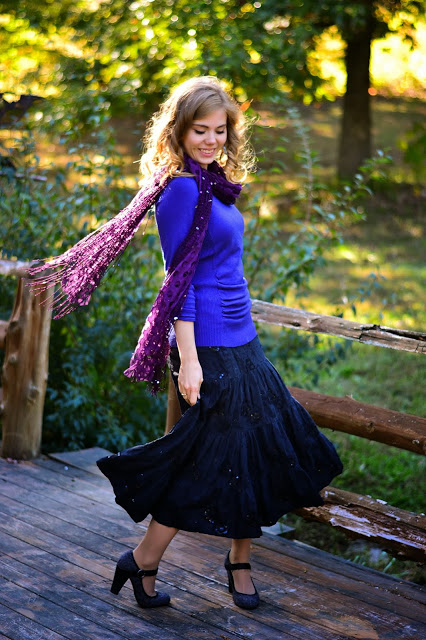 I am several weeks behind in sharing church outfits and sermon notes. Reading through my notebook to see if I could just skip or condense one or two together, several points that had kind of confused me before became clear.  I was encouraged all over again by these messages and I’m afraid I just have to share; to remind myself of God’s intricate, beautiful Words to us.

The sermon text on 10.20.13 was Romans 6:19-23. In verse 18, Paul says, “having been set free from sin, you became slaves to righteousness” and then promptly says, “I speak in human terms”. By that he means this isn’t the best picture, but he’s speaking on our level. So, he gives us a point of comparison and a point of contrast for this analogy.
The comparison is that whether to sin or to righteousness, we present our members, offer ourselves, to something. The term means to show to be true. Think of the slavery going on in the 1770’s, when 50,000+ people were captured and shipped off. Essentially, they were no longer their own. They were beaten into submission. The children born to them were also made to submit and eventually slavery is all they knew. And when slavery is all you know, even if your heart’s desire is to be free, you yield to the master and have a resolve of submission. So is the life of sin. The Pharisees were so used to this slavery, they didn’t know they were in bondage.
The point should be made here that we are not in slave to sin because we were innocently captured and forced into it. Rather, we are bondslaves– un-free people who are attempting to repay a debt we owe. Thing is, that debt literally goes on for eternity.
But now that we have been set free from bondage to sin, we are, in Christ, a slave of righteousness. As we use this analogy as a comparison, the point is that we will recognize our circumstances and respond accordingly. We yield to sin or we yield to righteousness.

Now as a point of contrast, the fruit that comes out of slavery is obedience to sin, but when man bows his knee and his neck to Christ, He will raise that man up to beyond Eden. We often think about wanting to get back to our pre-fall state as unblemished Christians. But, what we have in Christ is so much greater than what we had in the Garden! As God’s children, we are co-heirs with Christ of His kingdom. We are Christ’s Bride, His beloved. We are invited to the marriage supper of the Lamb! God is so good to us.

My pastor told the story of St. Patrick, who was a slave in Ireland for 7 years before he ran away. He returned to the country where he was enslaved as a missionary. As a slave to God, he started 300 churches.
Paul doesn’t like the negative connotation that slavery often has as he uses this analogy to describe how we are slaves to righteousness. What we need to realize though is what a huge privilege it is.

They way the text is worded, we have been (passively) set free. Someone did that for you. And now we are free to live for Christ. We are now called to a life of quality, of sharing in the divine qualities of Christ. Union with the Father, help of the Holy Spirit, love of God, etc. Wow.  We cannot fathom this love. Taken out of a selfish worldview and into a God-glorifying attitude, we have to remind ourselves of our union with Christ.

We have been given this grace lavishly. In Christ, we should not be able to tolerate any act of sin in our lives because we are slaves to righteousness now, “to have your fruit to holiness, and the end, everlasting life”. We are not earning righteousness, like we earn wages of sin. No, we have been given Jesus’s righteousness and are called to live. that. out. Because we have been serving sin for so long, it can be difficult to serve a new Master. But by His grace, we will. 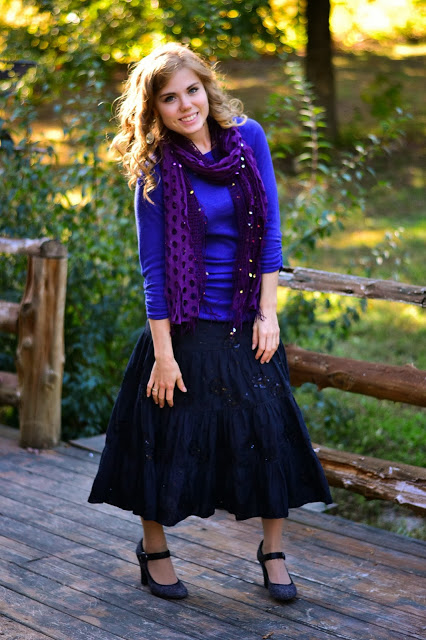 Sweater: Sears? $4
Skirt: Thrift store: $5?
Shoes: Walmart: $20
Earrings: F21: $3
Scarf: Birthday gift! (I also used it as a headcovering during service)
What I loved most about this outfit was the sparkles. I love glitter and sparkles and bright colors.
These pictures are almost a month old now and I’m realizing how bare the trees are now! Fall is such a pretty time. 🙂 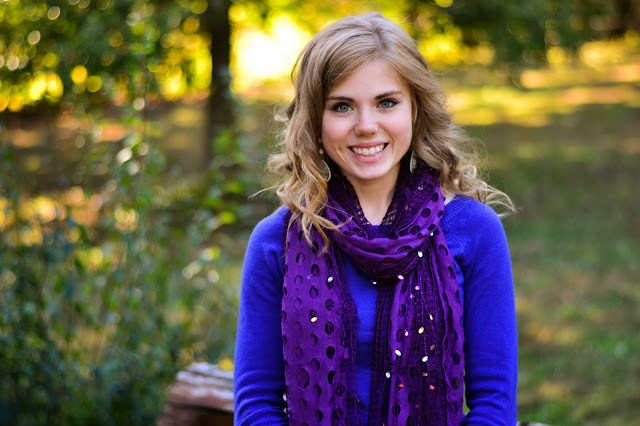 Well, hope you were as encouraged by that sermon as I was! And they just keep getting better and better and better…
What was y’alls sermon about this week? Whatcha think? Are you a glitter and bold colors person or do you prefer subdued hues? Have a great day!