How I Reupholstered a Goodwill Recliner

Hey y’all! I hope you had a wonderful Christmas season and Happy New Year! One of the things I dived into in 2017 was reupholstering Goodwill chairs.  I thought I’d share one of those projects with you this week! 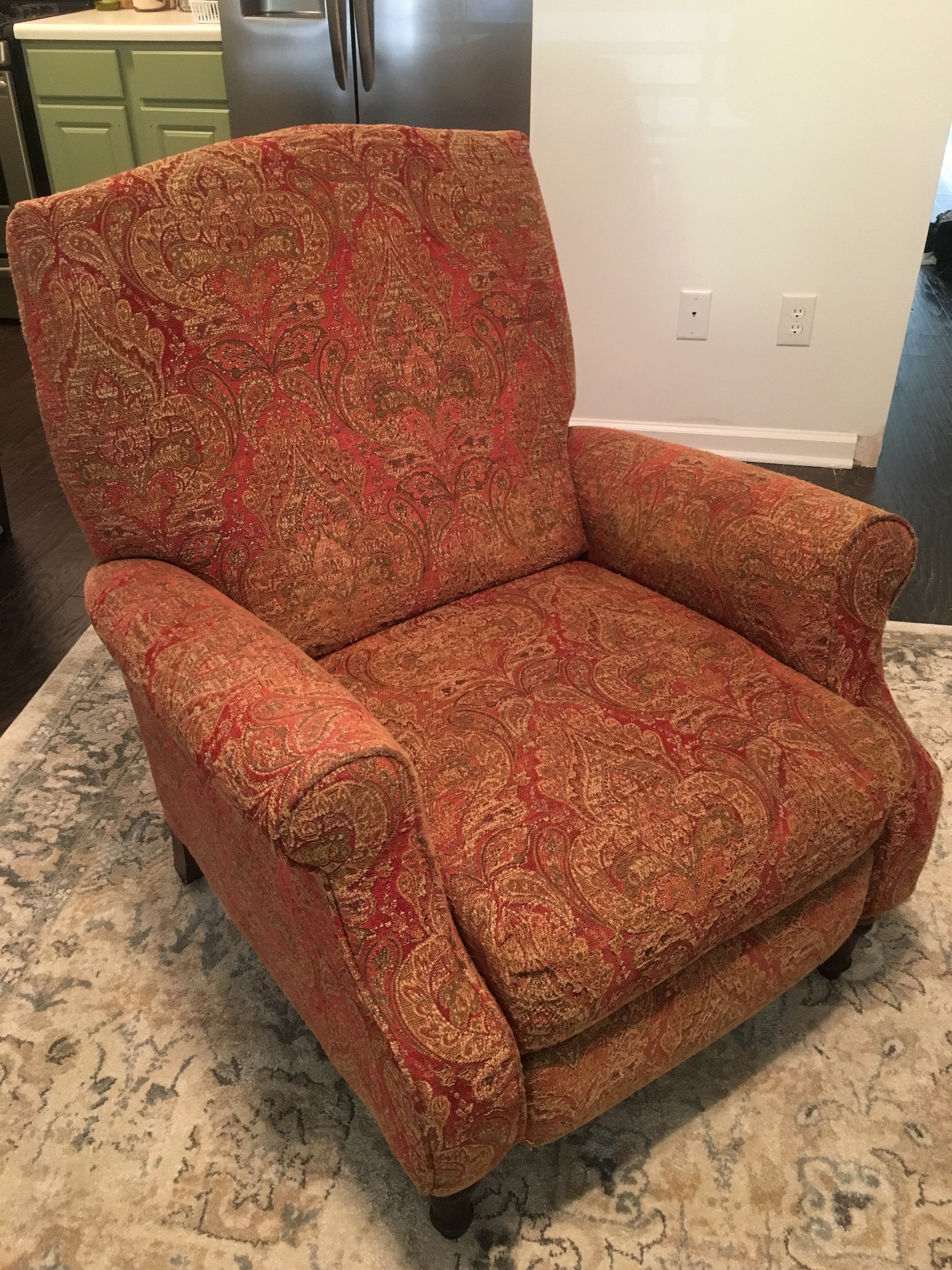 I bought this red recliner at Goodwill for $14 last summer. It was comfy and sturdy, but a horrible color for my white, steel blue, and sage green living room. As soon as I bought it I started searching for new fabric to recover it. It took a couple months of pricing fabrics and ordering samples to finally settle on this amazing Magnolia Homes Upholstery Boulder Spa fabric. Fabric.com was having a GREAT sale, so I only spent $35 on 6 yards of this perfectly thick textile. 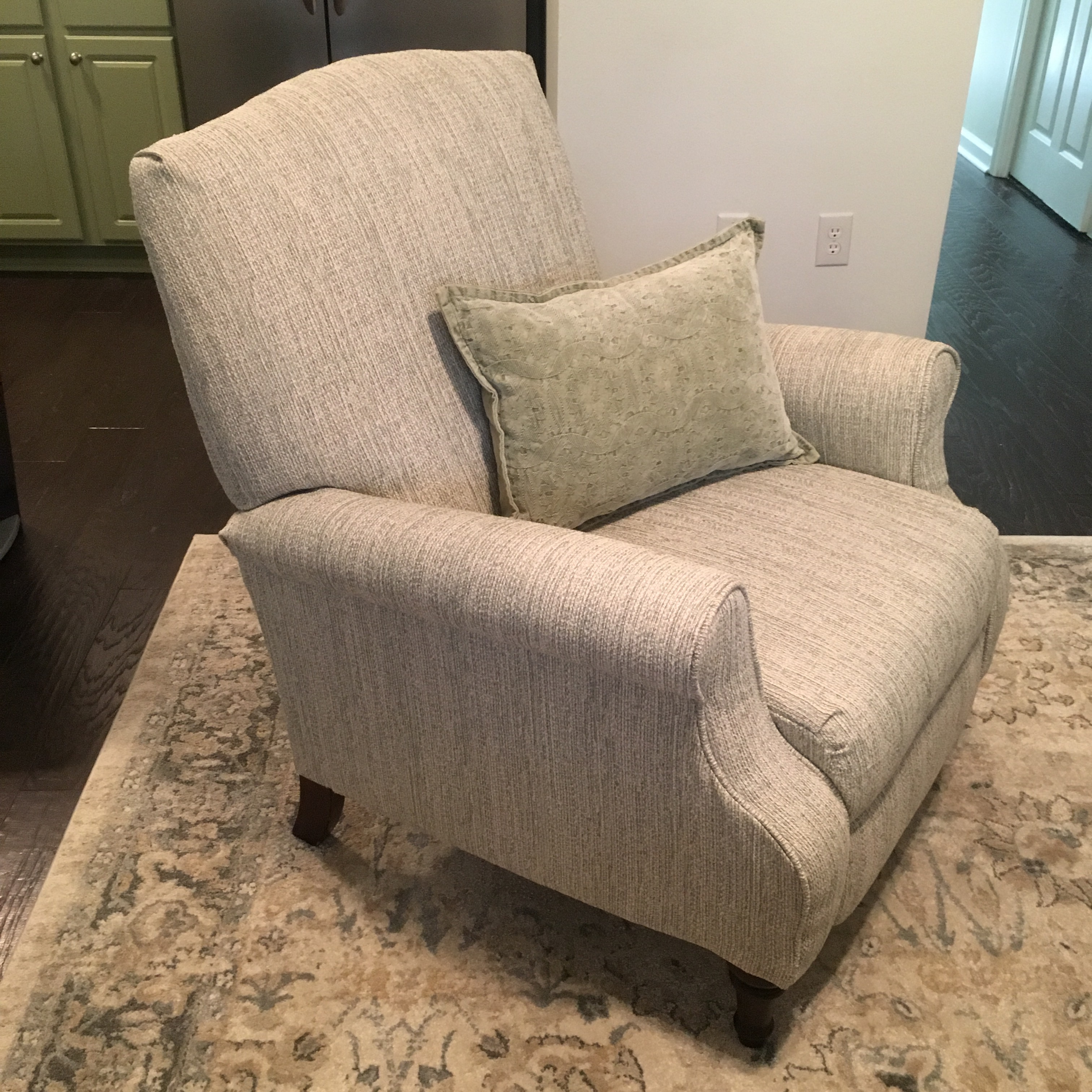 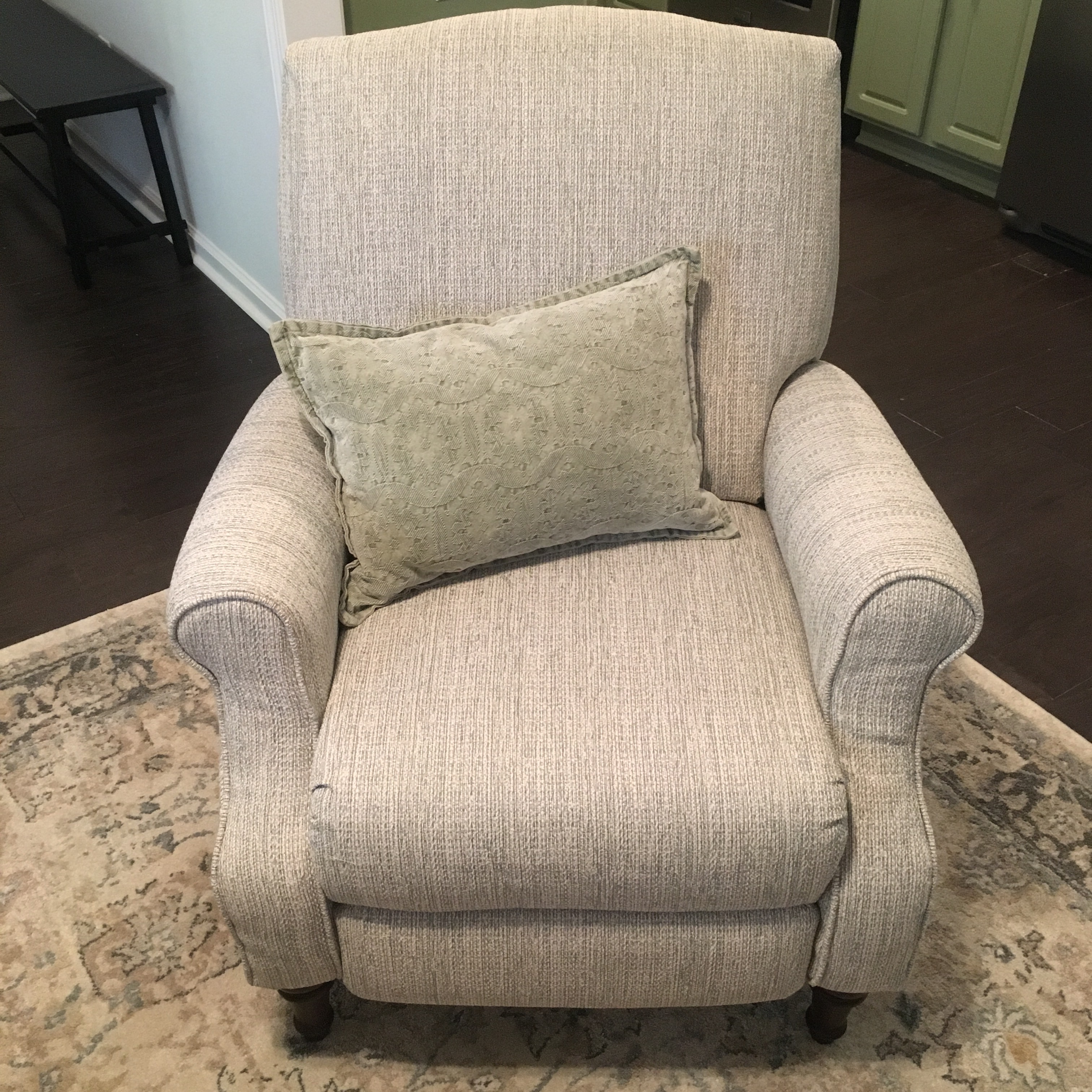 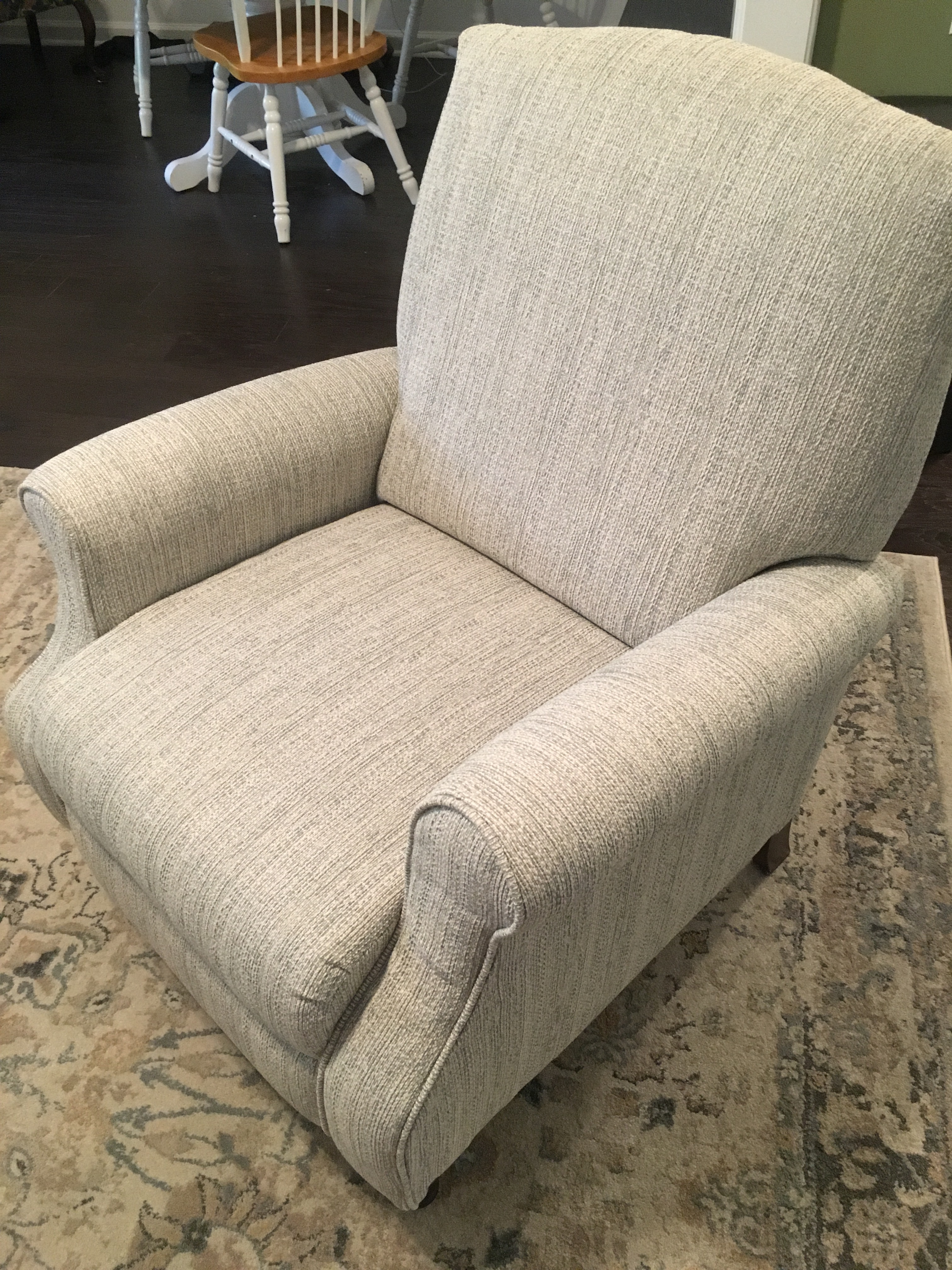 I’m the type to just jump into a project (after I’ve thought it through), without looking up advice from experts or how-to guides. My husband, however, ALWAYS looks for advice from people who have done it before. So when I was telling him I was about to embark on this challenge, he suggested I watch some YouTube videos on it. I found this one and although I mostly just listened to it as I fell asleep one night, it really helped give me the confidence to go for it. The biggest tips I picked out were: 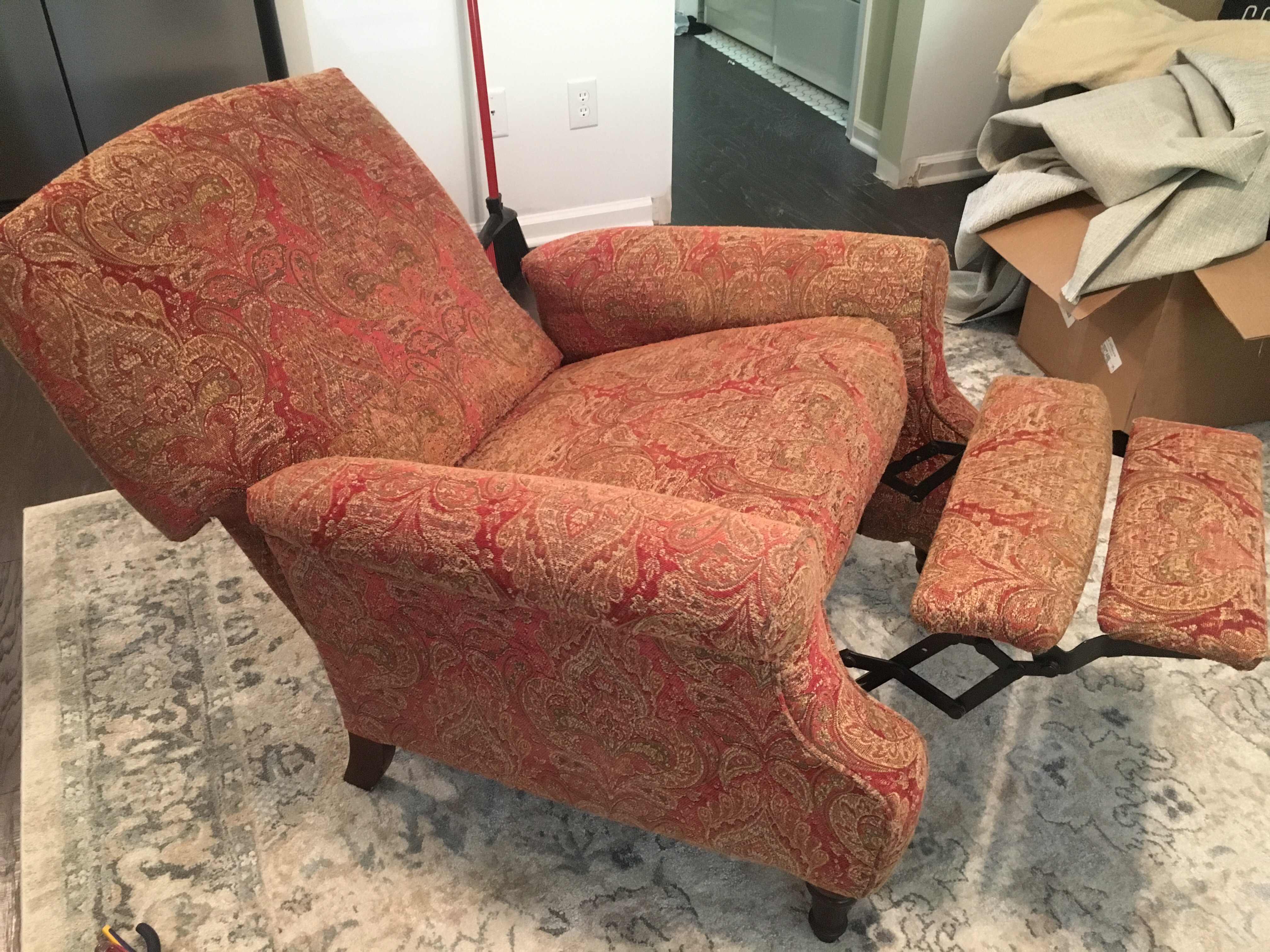 So, I started! I took lots of pictures and then plunged in with a flathead screwdriver and pliers. 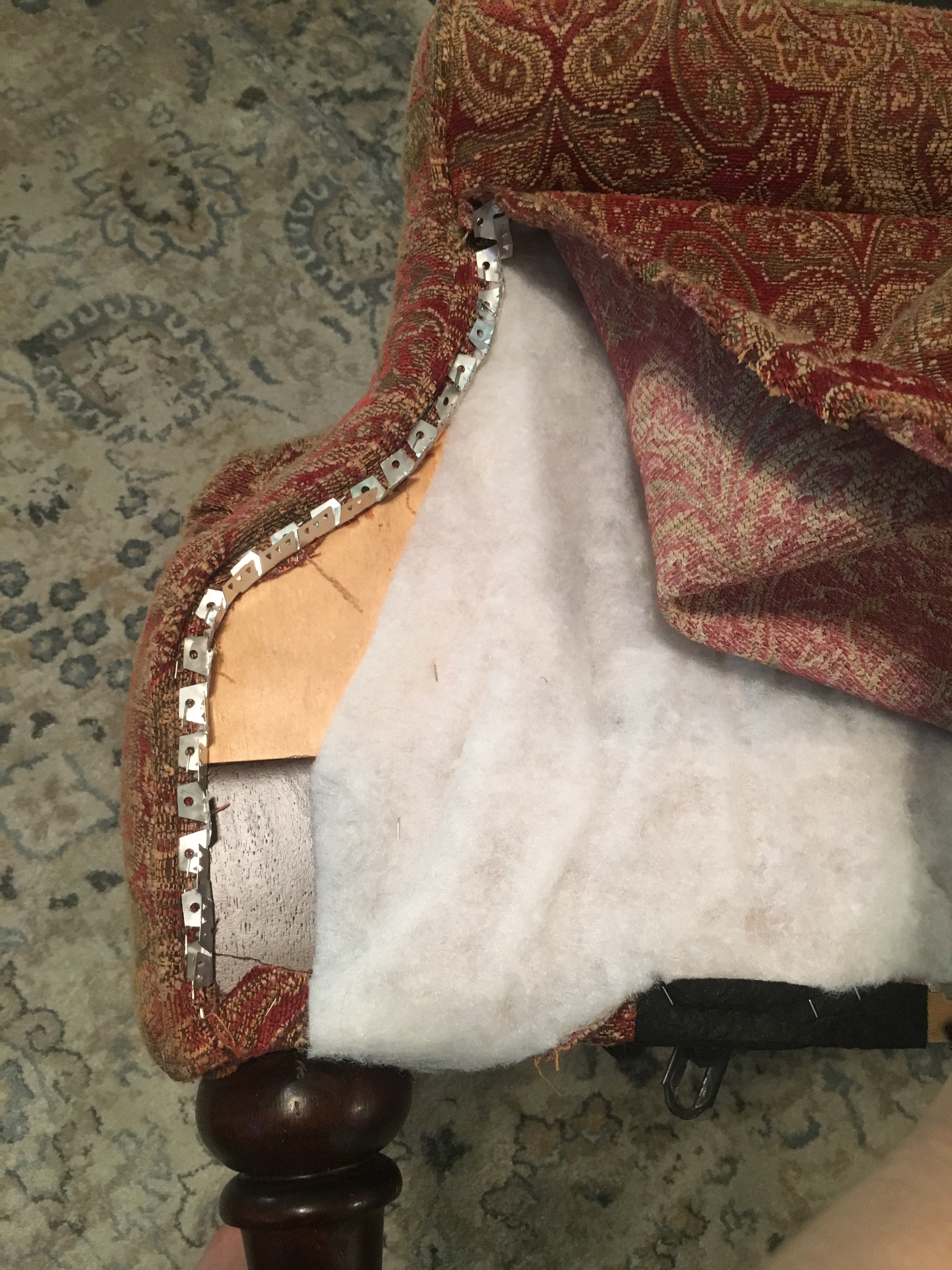 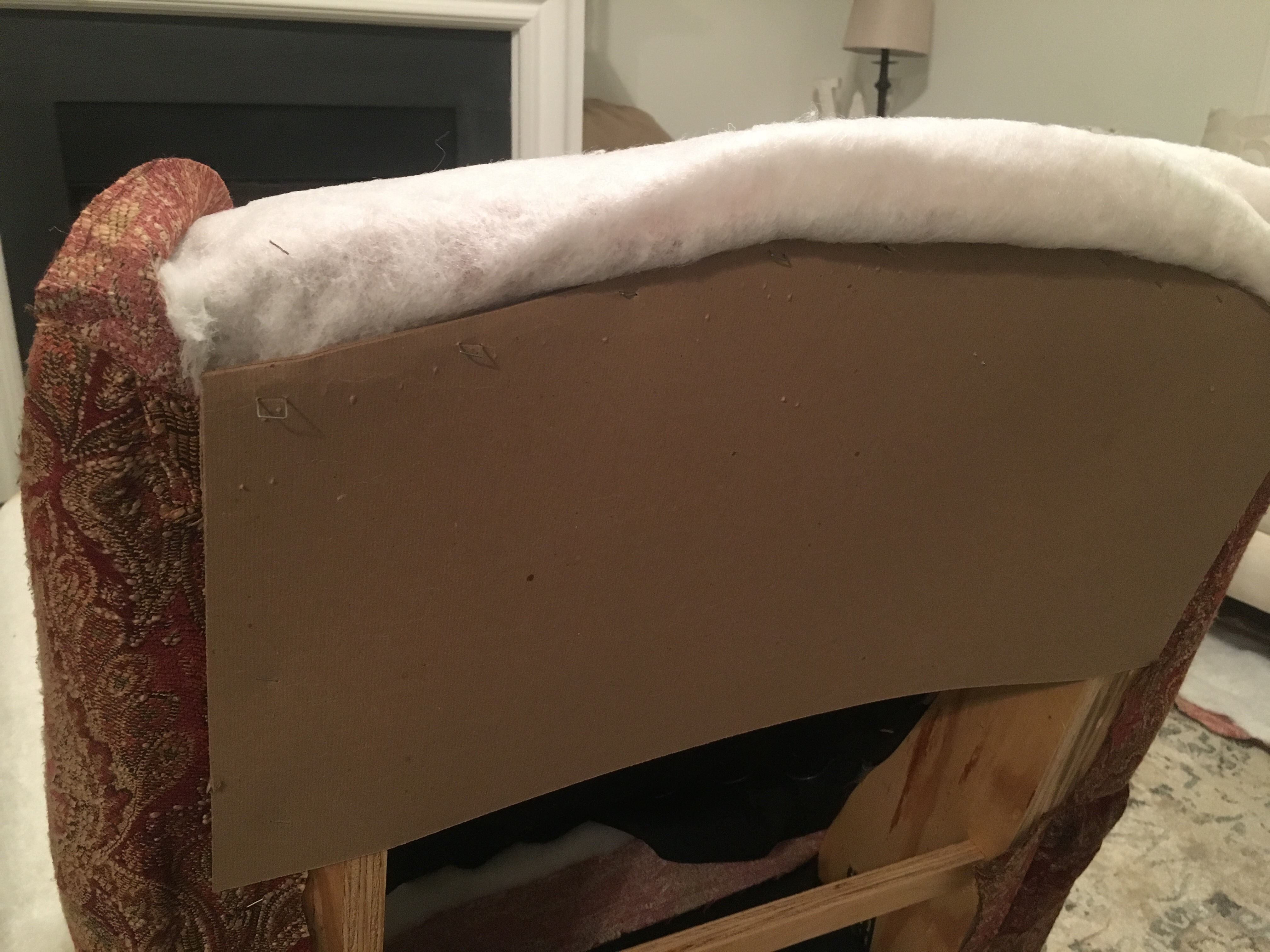 I didn’t realize how much cardboard there would be! I managed to salvage it all to reuse. 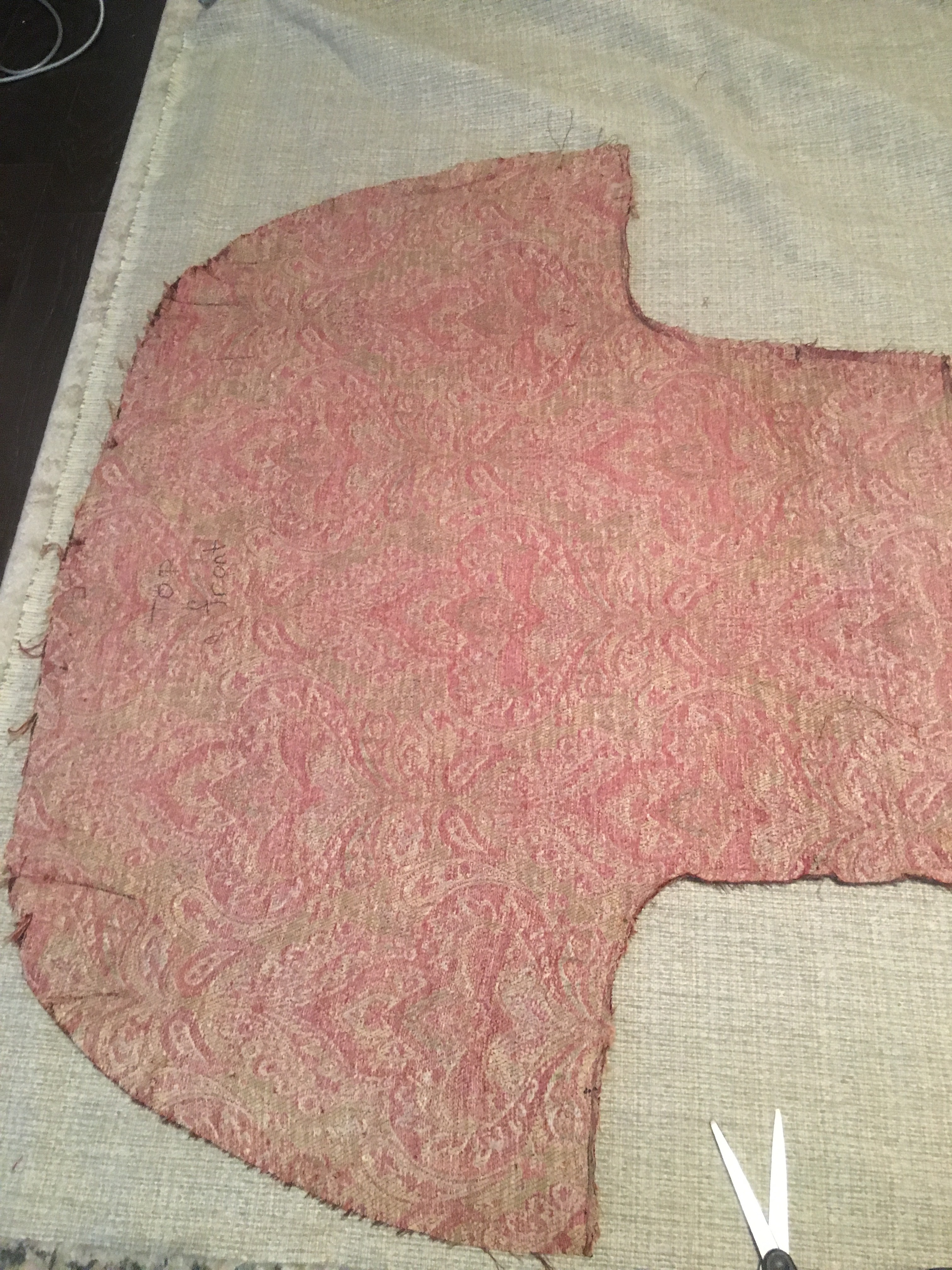 Once I got it mostly apart, I unpicked the sewn parts apart and used them as templates to cut out new fabric. I worked portion by portion in a way that made sense but also allowed me to reference the still-together parts when I would get turned around. 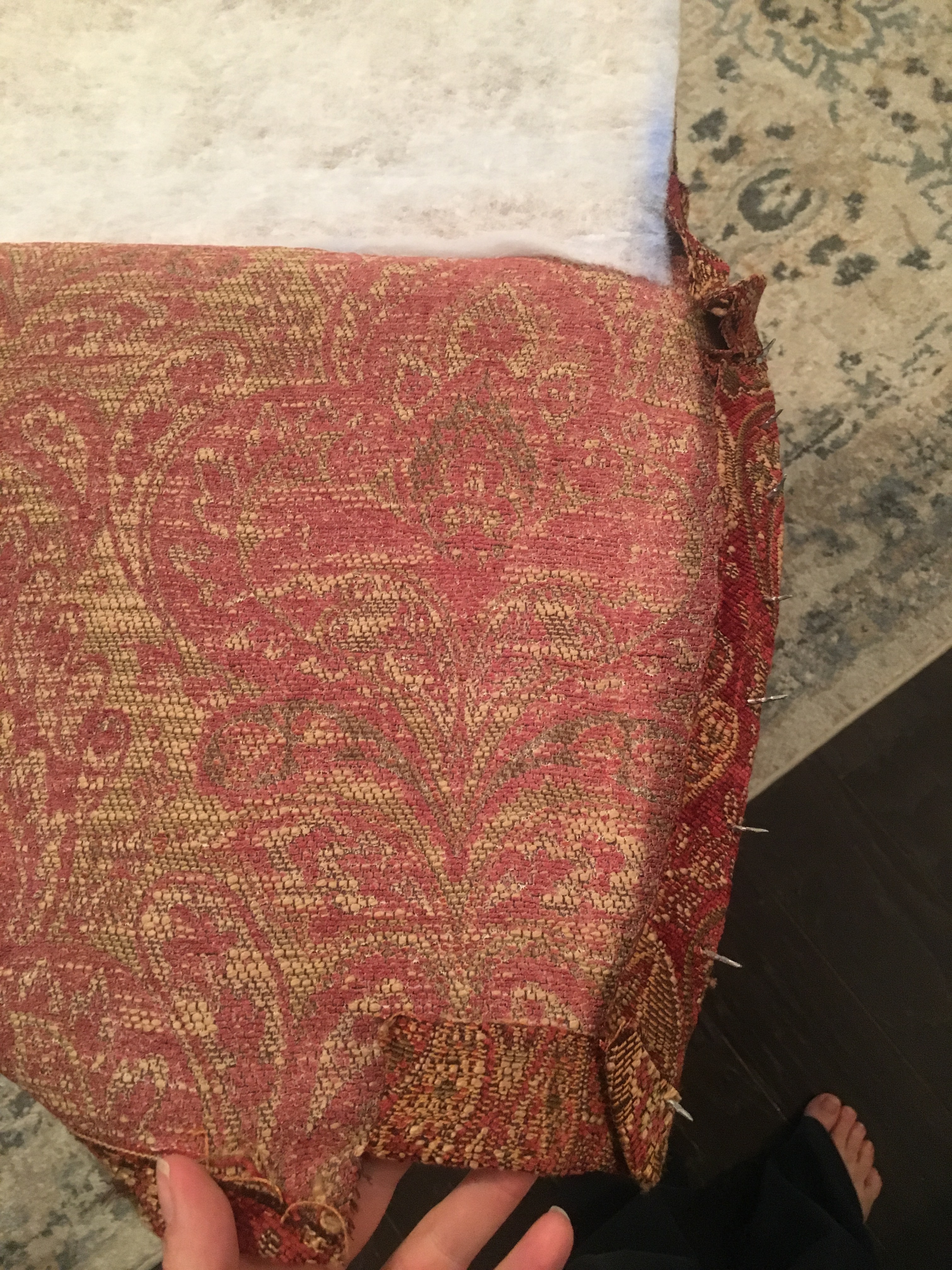 These tack strips were the most interesting part to me. They’re basically a metal strip of spikes that you fold into the seam and them pull tight and hammer into the parts where you need a crisp seam. On my chair, this was the back. 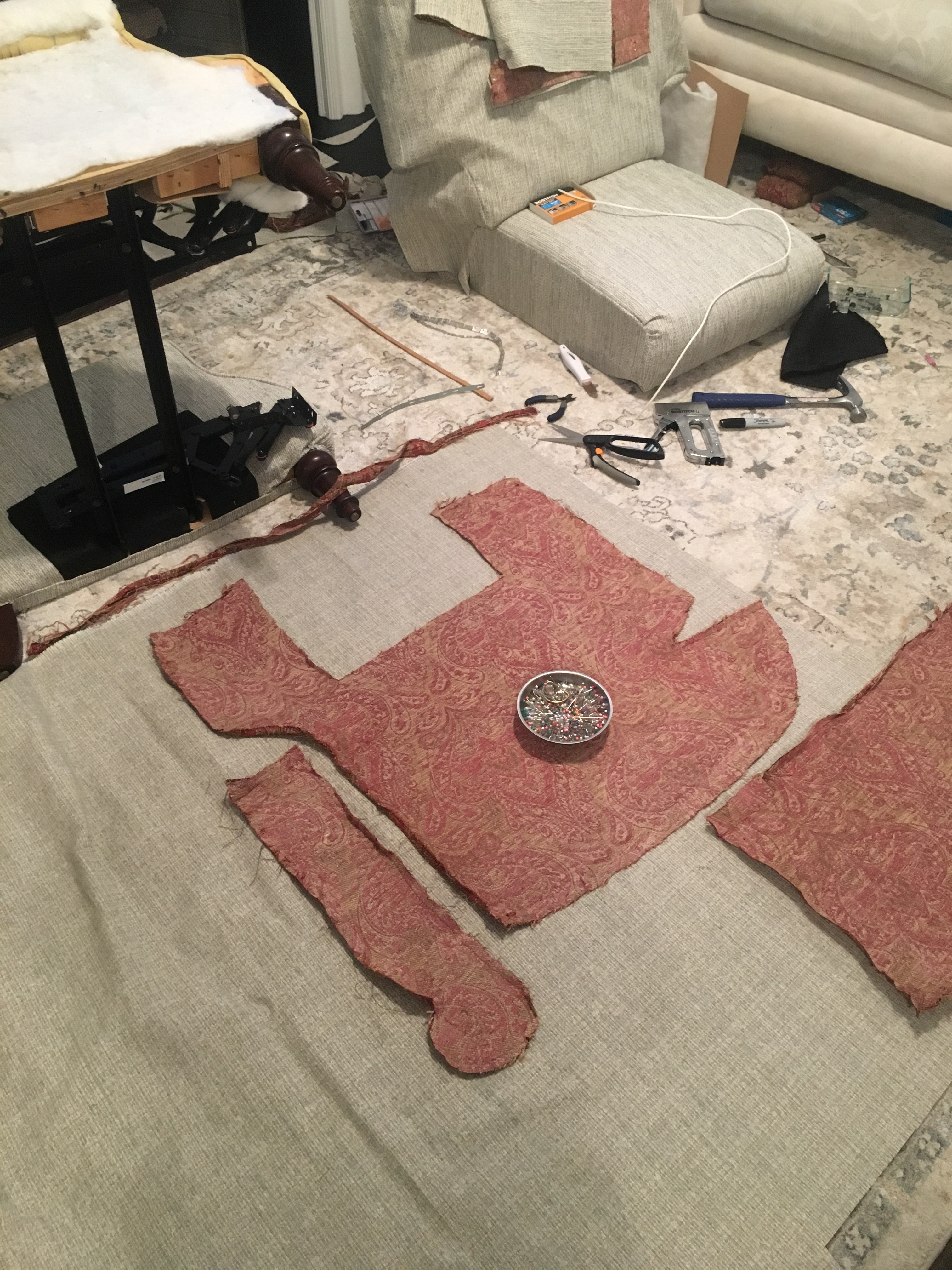 This project took me many weeks to complete. It was pretty physical work, so I had to rest a few days in between pulling staples. Calvin was so patient to let me keep this mess in the living room for that long. 😀 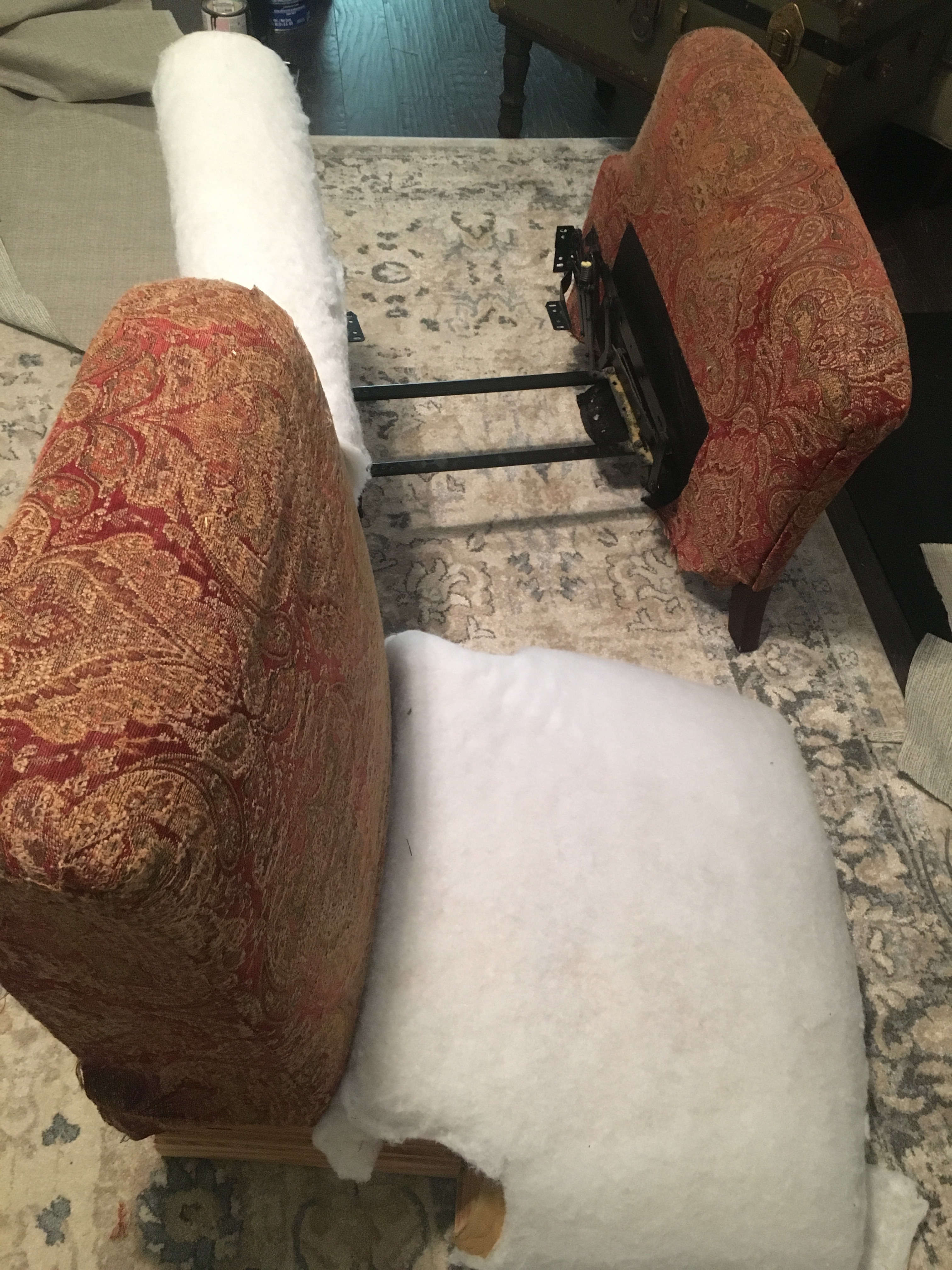 The hardest part to me was figuring out how to take the seat/back off the arms to be able to wrap the seat fabric correctly. This wasn’t at all intuitive and I had to try several different screws and eventually just brute force to get it apart. Not all recliner projects are like that, though. I may check underneath for this difficulty before I do one again. 😉 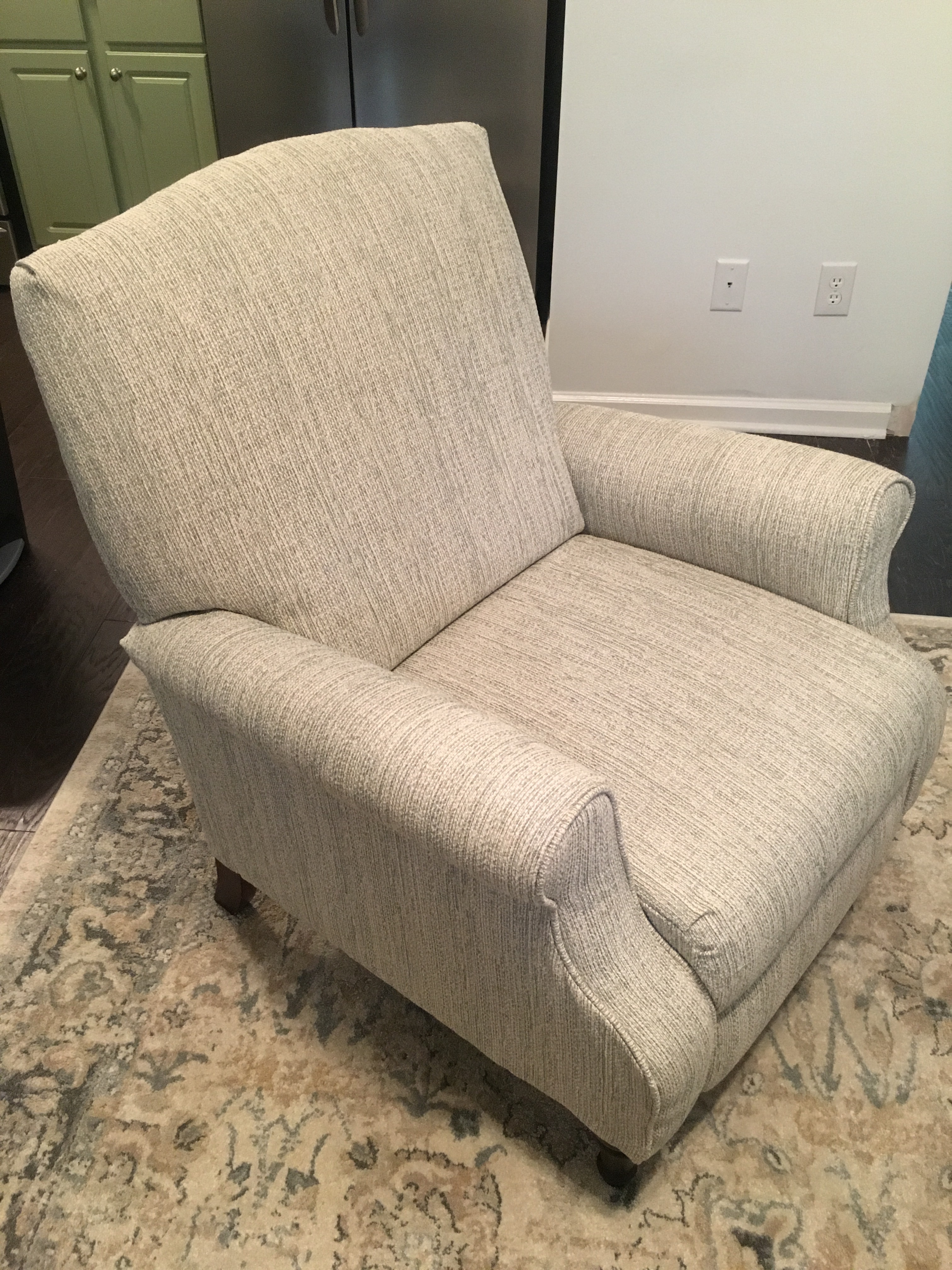 Despite how hard this was, it was TOTALLY worth it. I love the new look and it changed the entire atmosphere of the living room to have it finally matching the decor. Calvin was skeptical that the chair wouldn’t still feel too big for the space, but now that it isn’t a focal point, he loves it! 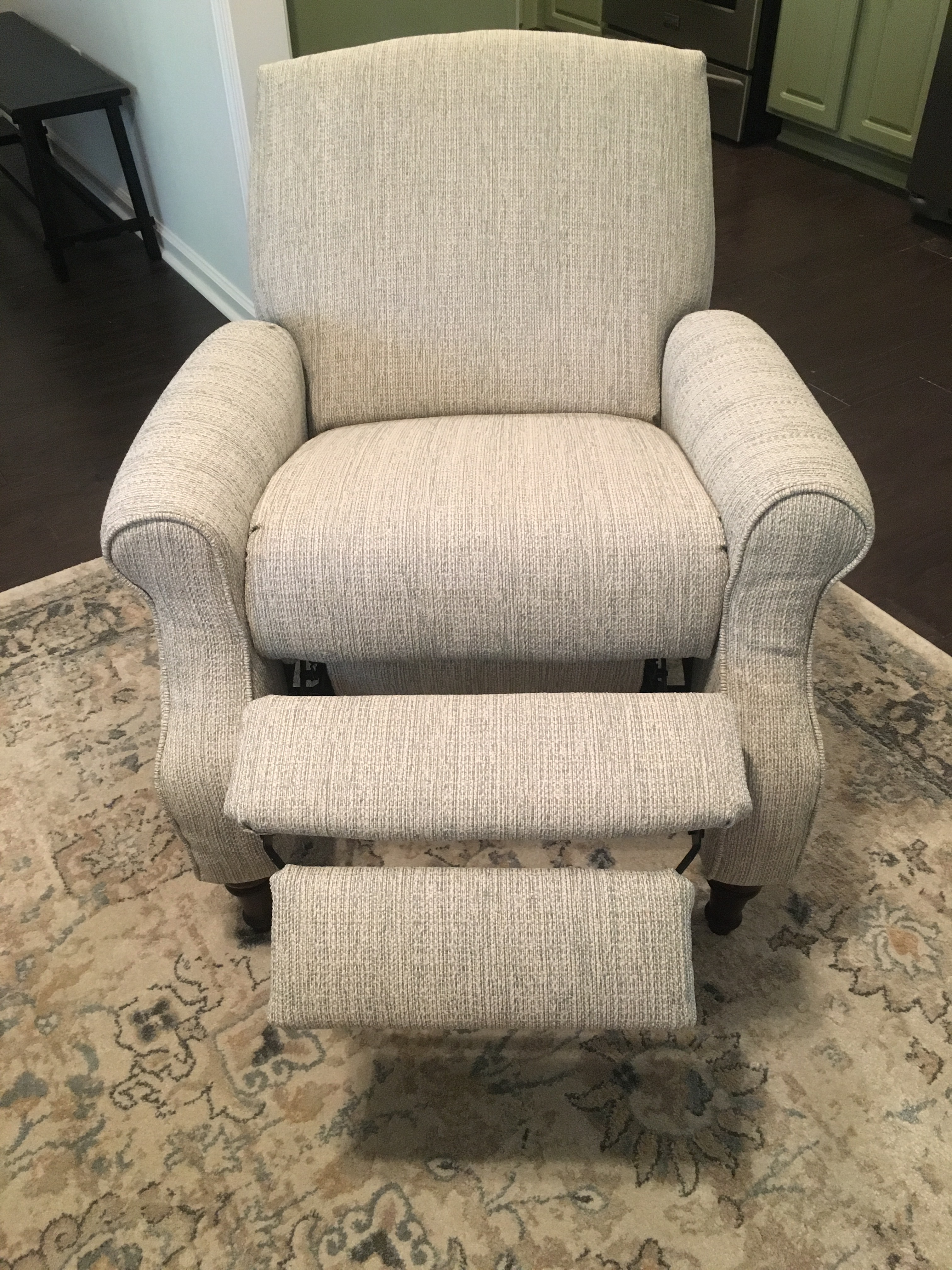 Because the piping that was on the chair before was plastic, I was able to reuse it! The only things I had to buy for this project were the fabric, a staple gun, a staple remover, and staples! This super soft down-filled pillow I found at Bargain Hunt for $6. 🙂 I love how (in-person at least) it brings out the green of the fabric. 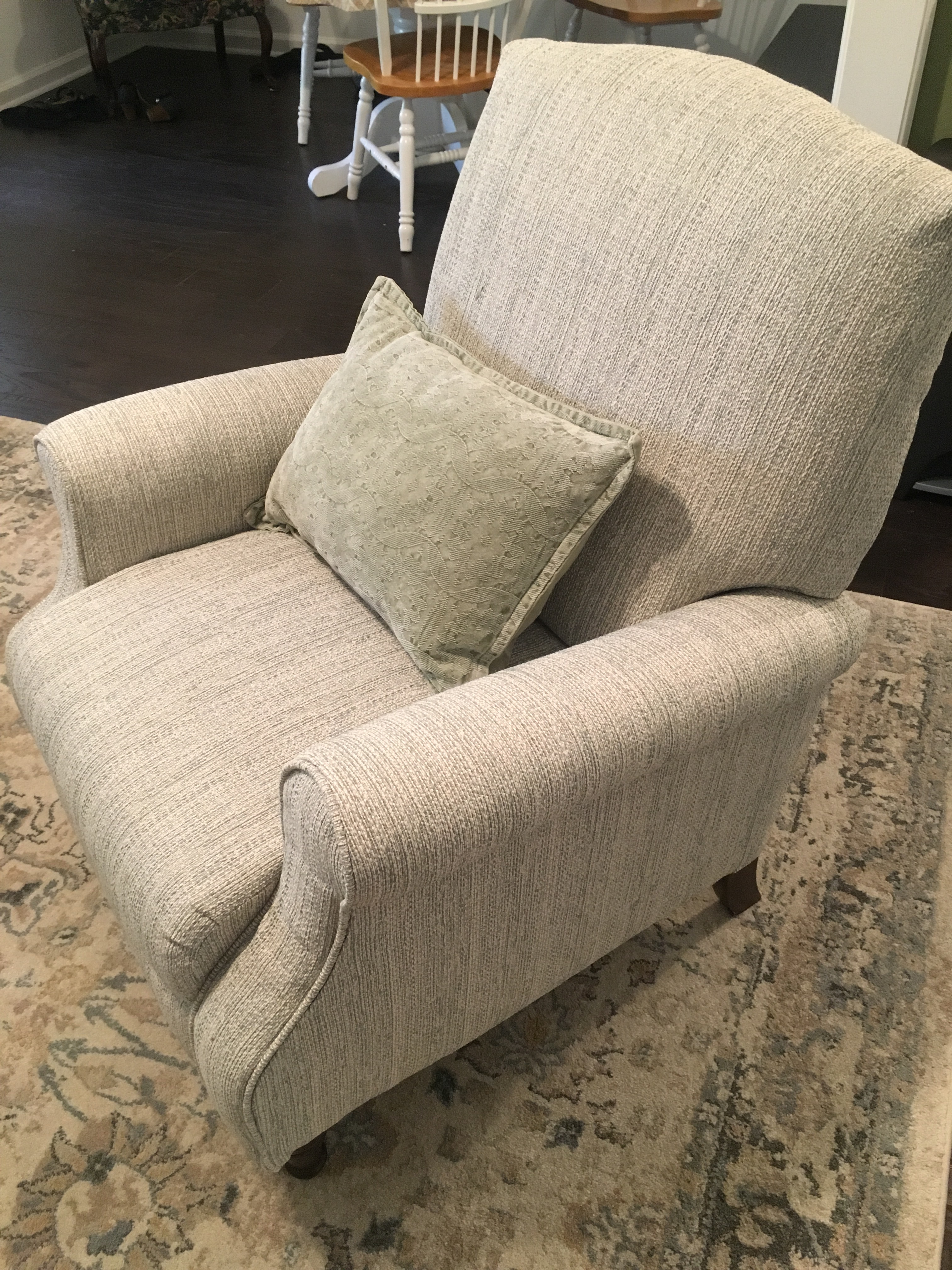 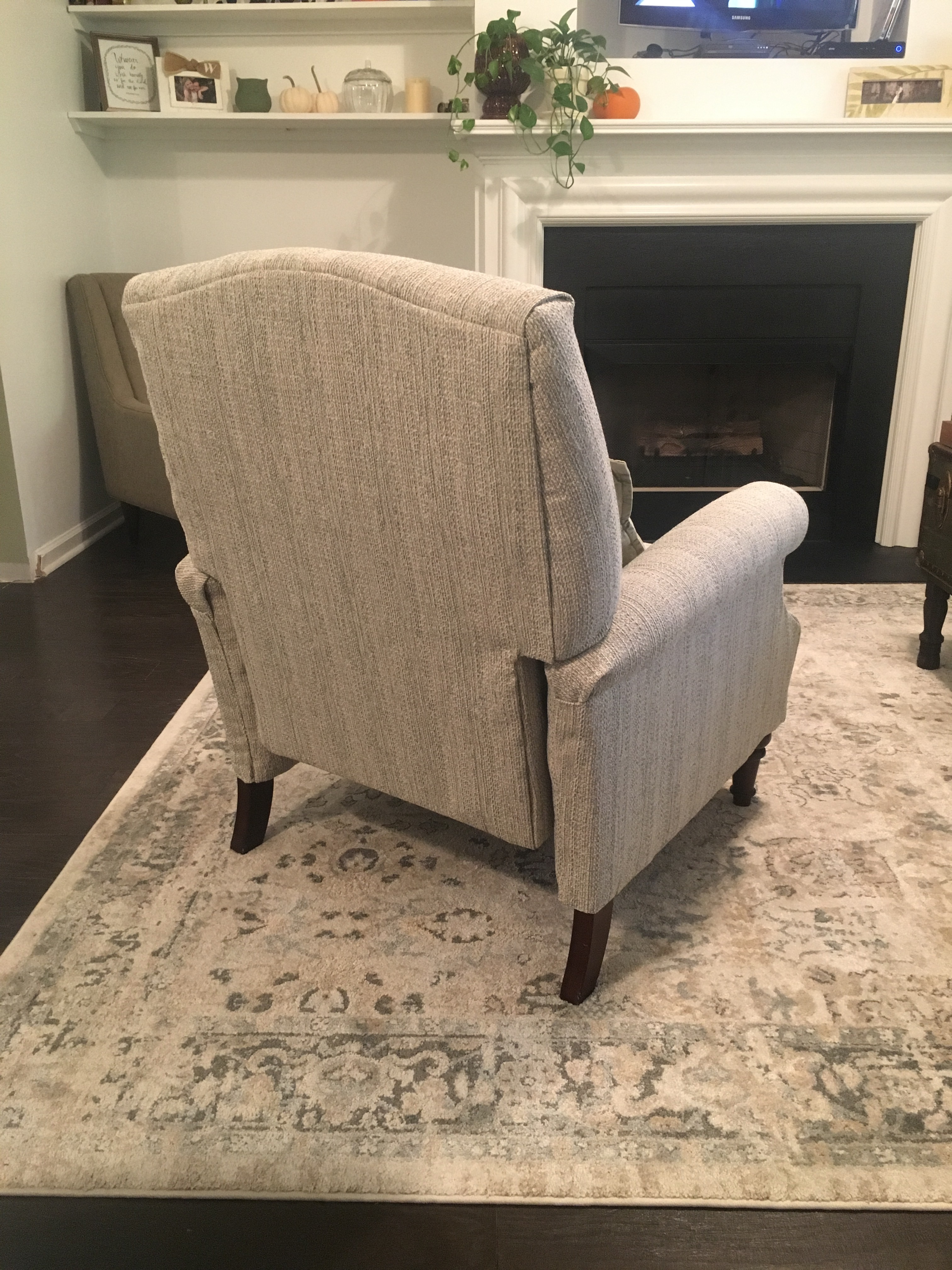 Even the back turned out okay! I’m pretty proud of this chair. But now I want to reupholster evvvvverything. Thanks for reading!

17 thoughts on “How I Reupholstered a Goodwill Recliner”