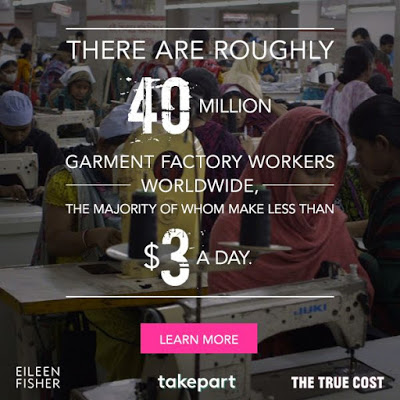 Have you ever wondered how Walmart charges $13.98 (or $3 if you catch the clearance rack!) for a dress that looks very similar to one you would pay $49.95 for at L.L. Bean? Until the last few weeks, I always thought paying more for a garment was just paying for a slight quality increase and the brand name. So, as I strived to be about the heart and not about the look, it seemed immodest to pay for the name brand. I chalked H&M’s low prices up to the fact that they bought in such high quantities they were able to get garments made for pennies. I never even thought of asking the question, “Who made my clothes?”
Even when I started my own clothing line last year and was shocked at how much it cost to get a garment made here in the U.S., I thought it was because I was paying in dollars and not Chinese yen that made it so expensive. 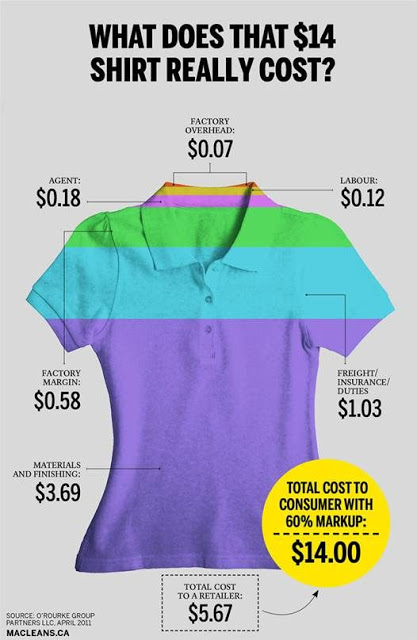 With all our modern technologies, there are a lot of ways that clothing manufacturing can be made streamlined with cutting machines, conveyor belts, ultra-fast needles, whatever– but there is still a human doing the bulk of the creation of that garment. In so. many. factories, that person is barely getting paid a living wage to work long days because the industry of cheap, quickly produced, throw-away fashion drives these factory owners to take on huge orders for too little money. Unfortunately, in this fast fashion system, as one Bangladeshi factory owner said, “Something has to give; it is often the safety and pay of the workers.”
I hesitate to generalize, because I know each factory, each company, each business, is run differently and has different standards, but the vast majority of dirt cheap clothing sold to us is sewn in a country where the labor laws are not enforced, where they allow massive chemical dumping in the rivers, and where oftentimes it is nearly impossible to track the supply chain because of all the politics and liabilities.
The more I learn about this, the more I am disgusted, discouraged, and ready to hunker down and weave my own flax clothing.
I’m disgusted with all the lies I’ve believed as a 21st century American. We expect things to be cheap, easy-to-come-by, and wrapped in plastic. Y’all, we are so far removed from the source of what we consume that we assume chicken grows in the freezer section.
I’m discouraged because I know there are millions of people who are mindlessly buying into the idea, just like I did, that a red sweater from Old Navy is going to make them smile bigger this Christmas season and have no clue they are contributing to a world-wide humanitarian disaster.
I’ve had lots of people tell me my Fresh Apparel skirts are way overpriced… and until recently, I was apologetic about having created a product that by necessity had to have what I would call a “high end” price tag. But the reality is, I’m charging just enough to recoup my costs of Texas-grown cotton and working with a facility in Tennessee who actually takes care of their workers. What that factory owner said in The True Cost documentary about the worker’s wage being squeezed in a business really hit home for me, because I’m not charging for my labor in custom-hemming every order that comes through FreshApparel.us. Some skirts I’ve spent over 8 hours working on… I can’t imagine having the pressure of supporting a family by creating a garment for pennies.
I’m so blessed in my own situation, so burdened for this industry, and so not okay with buying tanks for $1.80 from Forever 21 anymore. What I used to think was an awesome resource for us budget-conscious shoppers now sickens my stomach and makes me question what other things I am completely naive about.
So many of us are willing to pay extra for naturally-grown, local food– yet we don’t even question how a pair of jeans that has traveled halfway around the globe to our Walmart is the same price as a family-sized frozen lasagna.
“Oh, don’t tell me what’s in it, just let me enjoy it!” I’m sorry, but where another life is concerned, that oh-so-american-consumerism attitude is seriously selfish. I admit this as someone who for the last 10 years has been addicted to fast fashion, new clothes, and awesome deals. I can’t change how I’ve spent my money in the past, but I can and will be drastically changing how I evaluate, purchase, recommend, and curate clothing in the future.
If you haven’t watched The True Cost yet, watch it free on Netflix or dig some quarters out of the couch and rent it on Amazon.  Please.
I walked around for awhile in a crazy mad confused helpless daze when all this really sank in, so in my next post I’ll be sharing suggestions for how we can take immediate steps towards being a conscious promoter of ethical fashion… still on a budget, still modestly, and still with excellence.
We cannot ignore this.