Hey y’all! Feels funny to be doing two Sunday outfits in a row, but such is life right now. I spent the week in front of the computer doing Photoshop work and taking every chance I could to get outside in the amazing weather. Unfortunately that weather has ended (we have snow on the ground!), the laundry has suffered, and life shows no signs of slowing down, as evidenced by this outfit being a day late. S’all good though. 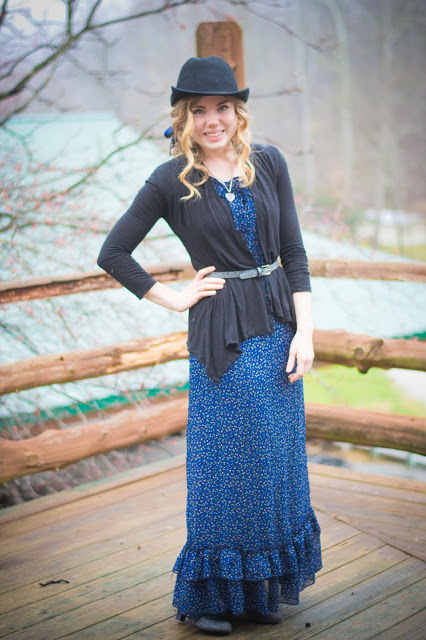 Since yesterday was Palm Sunday, we took a  break from Romans and instead heard the Word of God preached from Daniel 7 where he has that amazing prophetic dream in Babylon. It’s a long chapter, but the gist is that four beasts arise, each with distinct characteristics. Verse 9 begins the court scene in which God is the king and judge and He destroys or takes away the dominion of the beasts. Verse 13 Jesus, called the Son of Man (interestingly His favorite name for Himself in the New Testament), is presented before the Ancient of Days “And to Him was given dominion and glory and a kingdom, that all peoples, nations, and languages should serve Him; His dominion is an everlasting dominion which shall not pass away and His kingdom one that shall not be destroyed.” Daniel goes on to show the meaning of this dream in verse 17, “These four great beasts are four kings who shall arise out of the earth. But the saints of the Most High shall receive the kingdom and posses the kingdom, forever and ever.”

The Son of Man’s kingdom is not like these other kingdoms. Those other kingdoms were actual kingdoms on earth– and of course I didn’t write them down, but two were Babylon and the Roman Empire. Christ’s kingdom is not of this world (John 18:36) and Jesus showed this by riding into Jerusalem on a donkey. It wasn’t exactly the dramatic picture that the Jews had in their mind from Daniel 7.
John 18:37, “Pilate therefore said to Him, “Are You a king then?” Jesus answered, “You say rightly that I am a king. For this cause I was born, and for this cause I have come into the world, that I should bear witness to the truth. Everyone who is of the truth hears My voice.””

Christ’s purpose here on this earth was not only to take our place on the Cross, but also to bring His kingdom to this earth. He was crowned King on Calvary by crushing the head of the serpent and redeeming the seed of the woman; the battle that has been waging since the fall in Genesis 3.
What does this mean? It means that our purpose is not just advancing the Gospel on this earth. We are part of His Kingdom and we are to promote truth, holiness, righteousness.

The Bible has SO much to say. Every time we dig deeper, I’m astounded at the amazing overlap and awesome theologies the Lord has revealed in His Word; the prophesies of the Old Testament and how they were fulfilled in the New, the judgement of Jerusalem that is clearly spoken about and how it came to pass in 70 AD, the hope of our current state on earth and the encouragement for every sticky situation. 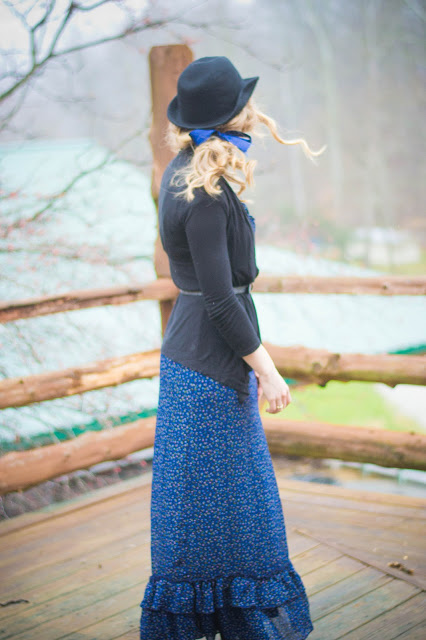 I thought I was gonna have to pull out an easy repeat outfit on an early Sunday morning, but nothing I’d worn in the past together was clean. So, I stole my sister’s idea and changed it up a bit. 😀 She wore this same navy blue maxi with the burgundy cardigan last week, so I went for the black this week. We sure have gotten our $8 worth out of these cardigans, ha. I pulled my littlest sister’s belt off the rack and liked how it looked to help with the pouf factor. It was kind of a “auto-pilot” morning and I wasn’t thinking too much, so somehow before I knew what I was doing, I had curled my hair a different way than I normally do– wrapping the hair from the root to the tip around the barrel of the curling iron. It was kind of untamed looking, so I pulled it up in a ribbon and chose a classy hat for my headcovering because I couldn’t find my black scarf. 😛
My shoes I chose because I didn’t want my suede shoes getting wet in the rain, and I wore green tights because they were my warmest and most comfortable pair.
Why do I go on and on about how I just went with what I had and didn’t stress? Because modest dressing does get easier! We all have our particularly hard moments, but in general, stress does no good. Knowing how each piece you have fits and moves and looks goes a long way to pulling together outfits in a jiffy that you may have never tried. Also, I could have thrown this outfit out for a number of silly reasons (copying my sister, not flattering, etc), but I didn’t because those reasons were self conscious and I needed to help the rest of my family get ready. 🙂 Relax. Go with the flow of the day. 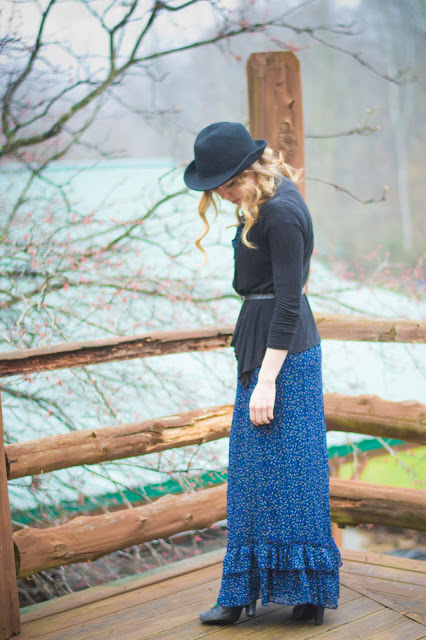 Whatcha think? Does dressing get easier? Have an awesome week! Hopefully I’ll see y’all again before the weekend!